WHAT:
For the rest of October, Mario has traded warp pipes for a decked-out trailer as his transportation of choice. Before Mario explores the many wild and wonderful Kingdoms of the Super Mario Odyssey game when it launches exclusively for the Nintendo Switch system on Oct. 27, he is taking off on a cross-country tour to explore some wild and wonderful locations in our world. Mario is traveling to several locations across the country to hang out with fans, show off his cool new Mario-themed trailer and let everyone play his new game before it launches on Oct. 27

You are invited to join Mario on his cross-country adventure by meeting him at his stop in Philadelphia at the Philadelphia Museum of Art on Oct. 24. You will have a chance to take photos with the Mario costumed character complete with a Cappy cap, play Super Mario Odyssey and check out the powered-up trailer, with a giant inflatable Cappy. Cappy is Mario’s new companion in Super Mario Odyssey who gives Mario new moves that redefine the Super Mario gameplay.

In addition to this tour stop, Mario is making detours at visually spectacular locations around the country to snap photos and take in the sights … just like a tourist! You can follow his cross-country odyssey by following Nintendo on Twitter, Instagram and Tumblr. 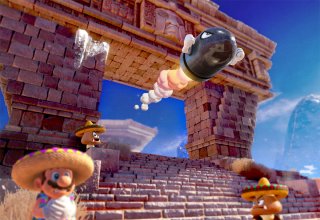