Yono and the Celestial Elephants – Many adventure games have a distinct lack of elephants … but that’s all about to change because Yono is here. The Yono and the Celestial Elephants game is a grand adventure, featuring carefully designed puzzles, treasure hunts, a sprinkling of combat and a world full of people. Play as a young elephant tasked to save a world he’s never seen before, and explore the rich history of a kingdom where humans, zombies and robots live side by side.

Wulverblade – Help Britannia defeat the Romans in Wulverblade, a hardcore side-scrolling beat-’em-up game inspired by old arcade classics of the ’80s and ’90s. Go it alone or team up with a friend in local two-player co-op.* It’s time to show the Ninth Legion what you’re made of!

Experience a ruthless top-down cyberpunk shooter and blast your way through enemies and walls. Upgrade, enhance and build up your strength. The path to stopping the Overseer is ever changing.

Blast your way through enemies and walls with guns and cybernetic abilities. Experiment with different roles like the Hacker or the Cyber Psycho. Upgrade your character stats, discover new cybernetic enhancements and build up strength. Every death is a new beginning — the path to stopping the Overseer is never the same.

Grow from a boy to a legend.

You wake up and find a letter from your father. He is gone...

The only lead is his old notebook and a mysterious necklace. What happened?

Explore the islands of Uncharted Seas, a world filled with many dangers, puzzles and secrets. Fight monsters, learn to use magic and discover ancient treasures which will help you on your quest. Use all your wits and skill to unravel the mysteries of the ancient kingdom Arcadia and sea monster Oceanhorn.

Unbox: Newbie's Adventure is a unique physics-platformer. Enjoy an epic single player adventure or grab up to four friends for local multiplayer races, battles and challenges!

The Global Postal Service is nearing bankruptcy! To save themselves, they have created self-delivering boxes. Play as the GPS' latest cardboard creation, Newbie, as you attempt to save the day. Dress to impress with a massive range of over 40,000 combinations of hats, clothes accessories and funny faces. Explore huge worlds full of challenges, collectibles and boxy boss battles as you compete against the dastardly Wild Cards!

Don't be a square! Think outside the box and create your very own cool cube!
(Nintendo eShop on Nintendo Switch)

It's 8:08am on 8th August 1988, and the evil Dr. H8 has brought the world to the brink of total annihilation! His demands are simple: pay $88 octillion within 88 minutes, or Dr. H8's 88 thermo-nuclear warheads will wipe out the Earth! But who will save us in our time of need? The bravest? The boldest? No... the 88 Heroes (plus ten of their friends)!

Prepare to infiltrate Dr. H8's lair with the help of the strangest, dumbest and most pointless superheroes ever! With 88 levels between you and Dr. H8, only 88 seconds to complete each level and the 88-minute Doomsday clock already ticking, lead 98 unique characters – each with their own special abilities – on a platform-hopping, enemy-smashing, danger-dodging mission to save Earth from complete destruction!
(Nintendo eShop on Nintendo Switch)

ACA NEOGEO THE KING OF FIGHTERS ’95 - Twenty-four SNK fighting stars put their mettle to the test in this dream battle! Create your own team for the ultimate fight!

In addition to the character of popular work such as "FATAL FURY" and "ART OF FIGHTING" in the sequel title of the previous work "KOF '94", Yagamian will participate as the rival of the main character Kyo Kusanagi.

With the team edit function installed, it became possible to form a team with the player's favorite character.

Don’t Knock Twice - One knock to wake her from her bed, Twice to raise her from the dead.

Don't Knock Twice is a first-person horror game based on a psychologically terrifying urban legend. To save her estranged daughter, a guilt-ridden mother must uncover the frightening truth behind the urban tale of a vengeful, demonic witch.

Explore a grand manor house and interact with almost every object you see. To find and save your daughter, you will explore all depths of the manor, searching for hidden clues and using items to fight or escape the terror that surrounds you. The game is based on the film, Don't Knock Twice, starring Katee Sackhoff (Battlestar Galactica) and directed by Caradog James (The Machine).
(Nintendo eShop on Nintendo Switch) – Available Oct. 17

The Flame in the Flood also features an original soundtrack by acclaimed Alt-Country rocker Chuck Ragan featuring The Camaraderie, The Fearless Kin and other special guests.
(Nintendo eShop on Nintendo Switch) 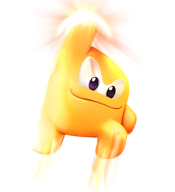 Someone needs to teach those Bullies a lesson in pain, so why not let it be You?

Squareboy vs Bullies is an old school beat 'em up by Rohan Narang that follows the titular Squareboy and his quest for Justice!

For far too long the bullies have gone unpunished and with no one else to put them in their place, Squareboy finds himself standing up against them to do what is right, not just for himself, but for everyone the bullies victimized. Will you help Squareboy fight off the Bullies?

Putty Pals - Grab a friend and get squishy! Putty Pals is the ultimate co-op platformer, challenging two players to work together and overcome puzzles in a bright and beautiful world.

Two adorable bouncing blobs are lost far from home, and only teamwork, communication and a whole lot of hilarious mistakes will guide them back. Sitting side-by-side on the couch, you and a friend will glide, bounce, squish and swing your way through a vibrant cartoon landscape, solving puzzles, avoiding danger and uncovering hidden secrets.

PURE CO-OP GOODNESS
Putty Pals isn’t just a single-player game that two people can play together. It’s been designed from the ground up to be a cooperative two-player experience.

A WHIMSICAL WORLD!
You know what Putty Pals isn’t? BROWN! Play as colorful characters in a colorful world and enjoy a fun, feel-good experience that will leave you smiling.

SO MUCH TO EXPLORE
Share hours of fun with your co-op buddy as you bounce your way through a bonanza of challenges and collectibles.

Little Adventure on the Prairie - A short and fun platforming adventure game.

Venture through 12 levels of pure slaughter and mindlessly try to kill all the monsters that are facing you.

Want to finish the last level from the first time without dying? Try using the different items throughout the levels to overcome all the monsters and obstacles easier.
(Nintendo eShop on Nintendo 3DS)

Nintendo eShop on Wii U

Volgarr the Viking possesses all the hallmarks of the true classics - simple controls, high challenge, and meticulous design - combined with hand-made pixel animation, an epic soundtrack, and buckets of blood.

Flex your gaming muscles and step into the arena with Volgarr the Viking... or retire your gamer card. We dare you.
(Nintendo eShop on Wii U)

Legend of Hero Tonma - Travel to another world and save the princess.

LEGEND OF HERO TONMA is an action game that puts players in control of the magic user Tonma.

Fight your way through seven stages using Tonma's jump ability and shot power. Collect power-ups and barriers to grow in strength and pummel your enemies. Bring that strength to the end of each stage to face off against and defeat the menacing bosses that aim to keep you from the princess. This well-detailed game's comic visuals and feel will have players wanting to come back for more frantic and exciting action.
(Virtual Console for Wii U)

Digital Champ Battle Boxing - Take down the greatest opponent of them all, DIGITAL CHAMP!

Set in the near future, DIGITAL CHAMP is a first-person-perspective boxing title that plunges players into the raw intensity of the ring! Determined to thwart Mother Computer's plot to conquer mankind, you infiltrate the enemy's domain, using your boxing skills to vanquish your foes. Each round is three minutes, with a total of twelve rounds to a match. Advance to the next contest through either a KO or by flattening an opponent three times in a round for a TKO. Utilize an arsenal of left and right jabs, hooks, power-charged crosses, and three different kinds of "Devastator" punches. Deftly block and slip your opponent’s attacks, and look for your chance to lay them out.
(Virtual Console for Wii U)

MOTOROADER - Outmaneuver your rivals in all 8 heats to become the champion!

Motoroader is a futuristic racing game that allows up to five players to compete against each other! Use the cash earned when you win a race to power up your machine! Not only can you change the "TIRE" and "BODY" of your vehicle, but you can also add "SPECIAL" parts! Jump over tall obstacles with a "HOPPER" and blast past your rivals at incredible speeds with "NITRO"! What multiplayer game would be complete without attack items? Use a forward-launching "GRENADE" or a backward-dropping "BOMBER" to blow up and knock away your rivals!
(Virtual Console for Wii U)