Wii U Edition Will Include Multiple Add-On Content Packs 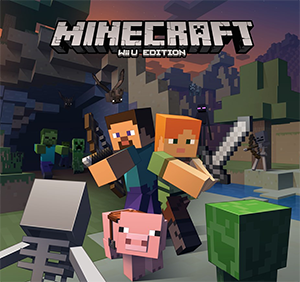 REDMOND, Wash., Dec. 7, 2015 – Mojang’s video game phenomenon Minecraft launches worldwide on Nintendo’s Wii U home console on Dec. 17. Minecraft: Wii U Edition comes with multiple add-on content packs, and will be available in the Nintendo eShop on Wii U in North America for $29.99. Nintendo and Mojang are also collaborating on new content for Nintendo fans to be released at a future date. More details about this content will be released at a later time.

The game will feature off-TV play, so players can keep their games going on the screen of the Wii U GamePad controller if another family member wants to watch something else on TV. The game also comes with some of the most popular current Minecraft add-on content packs:

“With so many included add-on content packs, Minecraft: Wii U Edition brings an exciting collection of Minecraft content and experiences to Nintendo fans,” said Reggie Fils-Aime, Nintendo of America’s President and COO. “Wii U players will have plenty of reasons to keep coming back to this iconic gaming experience.”


In addition to the content that comes with the game, players will also be able to expand their experience with 16 additional add-on packs available for purchase within the Nintendo eShop at launch:

More add-on packs will also be available for the game in the future.

About Nintendo: The worldwide pioneer in the creation of interactive entertainment, Nintendo Co., Ltd., of Kyoto, Japan, manufactures and markets hardware and software for its Wii U™ and Wii™ home consoles, and Nintendo 3DS™ and Nintendo DS™ families of portable systems. Since 1983, when it launched the Nintendo Entertainment System™, Nintendo has sold more than 4.3 billion video games and more than 686 million hardware units globally, including the current-generation Wii U, Nintendo 3DS and Nintendo 3DS XL, as well as the Game Boy™, Game Boy Advance, Nintendo DS, Nintendo DSi™ and Nintendo DSi XL™, Super NES™, Nintendo 64™, Nintendo GameCube™ and Wii systems. It has also created industry icons that have become well-known, household names such as Mario™, Donkey Kong™, Metroid™, Zelda™ and Pokémon™. A wholly owned subsidiary, Nintendo of America Inc., based in Redmond, Wash., serves as headquarters for Nintendo’s operations in the Western Hemisphere. For more information about Nintendo, please visit the company’s website at http://www.nintendo.com.

About Mojang: Mojang is a game development studio based in Sweden, best known for developing “Minecraft.” In 2014, Mojang joined Microsoft Studios to continue work on “Minecraft” and bring their vision, creative energy and innovative mindset to the development of future games.