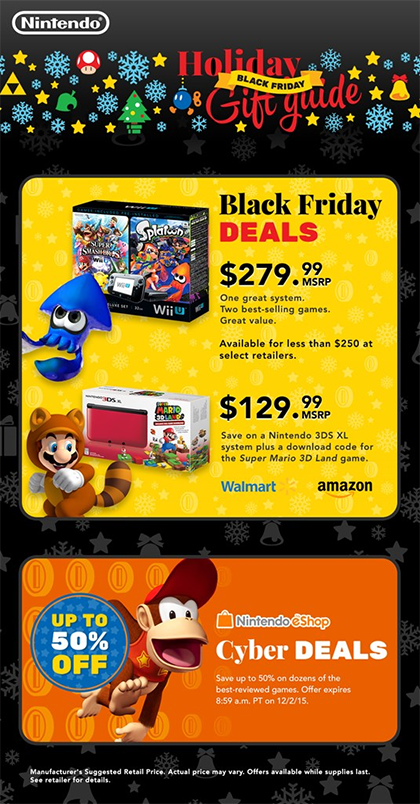 REDMOND, Wash., Nov. 13, 2015 – Major retailers nationwide will be offering heaps of great deals on some of Nintendo’s most popular games and systems for the holidays, highlighted by a new Smash Splat Wii U Deluxe Set that includes the Wii U console and two highly sought-after games: Super Smash Bros. for Wii U and the squid hit of the year: Splatoon, both pre-installed on the system. This bundle launches in retail stores at a low suggested retail price of $279.99, with select retailers offering it at less than $250. Walmart and Amazon will offer the original Nintendo 3DS XL system with a download code for the mega-hit game Super Mario 3D Land game for a suggested retail price of $129.99.

Or, if you prefer the flagship New Nintendo 3DS XL, you can save $20 off the suggested retail price of $199.99 at major retail stores. Additionally, starting Nov. 25, the Nintendo eShop will be offering up to 50 percent discounts on select downloadable games. More great savings will be available at various retailers.

“Fun is more affordable than ever. Whether you’re a Nintendo fan or shopping for one this holiday season, these excellent deals provide fun game experiences for the whole family,” said Scott Moffitt, Nintendo of America’s Executive Vice President of Sales & Marketing. “These great offers on Wii U, Nintendo 3DS and a large number of games represent an incredible value for people who want to make their holiday shopping dollars go as far as possible.”

As of today, here’s a roundup of some of the deals that will be available around Black Friday. See stores for specific dates. All offers are available while supplies last. And for a complete rundown of deals on multiple Nintendo products for the holidays, keep an eye on http://happyholidays.nintendo.com/deals

Smash Splat Wii U Deluxe Set
Suggested retail price of $279.99 at major retailers, available at Target and Walmart for less than $250

New Nintendo 3DS XL
Save $20 off the suggested retail price of $199.99 at Best Buy, Target, Toys R Us, GameStop and Walmart.com

Nintendo 3DS XL
Bundle with a download code for the Super Mario 3D Land game at a suggested retail price of $129.99 at Amazon.com, $129 at Walmart

Select Wii U Games at Walmart for $25

Nintendo eShop Cyber Deals
Gamers can treat themselves to a gift and save up to 50 percent on dozens of the best-reviewed games for the Wii U console and Nintendo 3DS family of systems. Prices start under $5, so it’s easy to add even more fun to your holiday season. 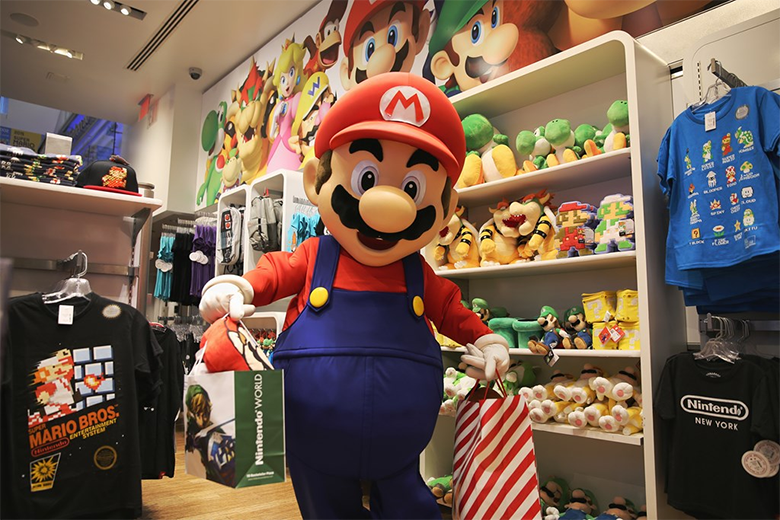 About Nintendo: The worldwide pioneer in the creation of interactive entertainment, Nintendo Co., Ltd., of Kyoto, Japan, manufactures and markets hardware and software for its Wii U™ and Wii™ home consoles, and Nintendo 3DS™ and Nintendo DS™ families of portable systems. Since 1983, when it launched the Nintendo Entertainment System™, Nintendo has sold more than 4.3 billion video games and more than 686 million hardware units globally, including the current-generation Wii U, Nintendo 3DS and Nintendo 3DS XL, as well as the Game Boy™, Game Boy Advance, Nintendo DS, Nintendo DSi™ and Nintendo DSi XL™, Super NES™, Nintendo 64™, Nintendo GameCube™ and Wii systems. It has also created industry icons that have become well-known, household names such as Mario™, Donkey Kong™, Metroid™, Zelda™ and Pokémon™. A wholly owned subsidiary, Nintendo of America Inc., based in Redmond, Wash., serves as headquarters for Nintendo’s operations in the Western Hemisphere. For more information about Nintendo, please visit the company’s website at http://www.nintendo.com.