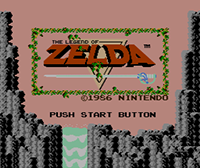 The Legend of Zelda™ – Reunite the Triforce and send Ganon packing.

Celebrate the Nintendo eShop "8-bit Summer" series with this smash-hit adventure, originally released on the NES™ console in 1987.

Ganon, the King of Evil, has broken free of the Dark World and has captured Hyrule's beloved Princess Zelda. But before she was caught, Zelda™ managed to shatter the Triforce of Wisdom and scatter its eight pieces throughout Hyrule. Begin your adventure by finding a small wooden sword in a dark cave. As you grow in stature, experience and strength, so do your weapons.

Help Link™ collect the captured pieces of the Triforce, rescue the princess and thwart Ganon's evil plans.
(For Nintendo 3DS™) 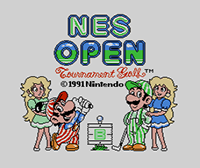 NES Open Tournament Golf™ – How can sand traps and water be this much fun?

We all know Mario™ is a hero, but did you know he's also a world-class golfer? This classic NES™ game from 1991 – now available for Nintendo 3DS as part of the Nintendo eShop's "8-bit Summer" series – lets you challenge another player in Stroke, Match and Tournament modes.

Play on three fantasy courses in the United States, the UK and Japan, and try to win a million dollars. Make sure you keep an eye on the wind and the distance to the hole before selecting your club, or else you'll be racking up some high scores –which is exactly what you don't want to do in this game.

Whether you're a beginner or an experienced golfer, NES Open Tournament Golf is perfect for those days when you just can't get to the local golf course.
(For Nintendo 3DS) 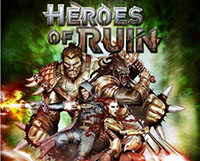 Heroes of Ruin™ (demo version) – Enter the Elder Forest using a customized character from one of two classes – Vindicator or Gunslinger. Discover fierce villains, optional side quests and the ability to link up with friends through local or worldwide multiplayer.

Create your own mercenary and battle forth on your own or join forces with other heroes in 4-player co-operative multiplayer.

Test your combat skills and earn rewards by taking on new daily challenges.
(For Nintendo 3DS)

Family Tennis 3D – A casual tennis game for Nintendo 3DS with simple controls that anyone can pick up and play.

The Family series comes to Nintendo 3DS with a casual tennis game that features eight playable characters and six different courts, all packed with variety. The addition of Easy Mode means absolutely anyone can play with the press of a button.

Start with the Tournament mode to unlock everything in the gallery, then try the minigames: Roulette Rally, Human Backboard and Survivor.

Play some doubles and make it a real show.
(For Nintendo 3DS)

An Akari is a puzzle in which you set lights based on hint numbers in order to entirely light up the white space. The main features of Akari are depth and easy-to-understand rules.

Numerous puzzles mean you'll have plenty of opportunities to experience the excitement of discovering new patterns. In Stage Clear mode, you progress by clearing puzzles one by one. In Random mode, puzzles are generated at random.
(For Nintendo 3DS)

Game of the Weekend

The "Game of the Weekend" program is featuring Sakura Samurai: Art of the Sword™.

Sakura Samurai: Art of the Sword lets players travel to ancient Japan and guide a young warrior as he battles waves of enemy soldiers to save a princess. As the heroic title character, you’ll travel a world rife with cherry-blossom beauty—and deadly danger—to rescue the legendary Princess Cherry Blossom. Her kidnapper has set dozens of blade-wielding henchmen in your path, and you’ll have to exercise your best battle senses to defeat them and save her. Learn to predict your foes’ moves, deftly dodge their attacks, and create opportunities for devastating counterattacks.

Topoloco - A fun way to learn world topography. Impress your friends at school and explore the atlas covering five continents.

Meet professor Topoloco. He's absolutely crazy about topography, and he's glad to have you in his world topography class. For each of the five continents he covers, you can practice your skills in a series of minigames, including locating cities and countries and dragging flags. Practice as much as you want to prepare for a final exam that you can take whenever you think you're ready.

Topoloco is both a fun topography learning game and a digital atlas for all ages.
(For Nintendo 3DS or Nintendo DSi)

Build the maximum number of words with the same combination of letters. Do it before time runs out or you will lose! Challenge yourself in this unique game of wit and skill. Practice your mental agility and your knowledge of the language in 3, 2, 1... WordsUp!

Making ceramics has never been more simple and fun. Become a true artist by creating one-of-a-kind pottery items and sharing them with your friends. Throw the clay on the wheel, release all your artistic talents and use dozens of materials to create your own designs. From the moment you glaze and fire your very first pot, you will feel accomplished and relaxed, as pottery is a great way to relieve your everyday stress and find your inner peace.

This uplifting experience can be enjoyed with your family and friends.
(for Wii™) 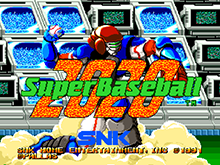 2020 SUPER BASEBALL - Originally released in 1991, this is not your typical baseball game.

In the near future, there are two leagues with a total of 12 teams for players to choose from. Pick your team and go for the championship. The games are held at the exclusive Cyber Egg Stadium, where the home run zone is alarmingly small and the fair zone is unusually wide. There is even a stop zone to stop any ball that lands there. As the game progresses Crackers (mines) are installed. During games, armor can be purchased to reinforce your players.

All this makes for a unique baseball experience. You may be a bit perplexed at first, but once you get used to it and begin devising a strategy, you might even start enjoying all the curveballs being thrown at you.
(for Wii™)

This is the only time I’ve been to your website. Thnx for posting more information.