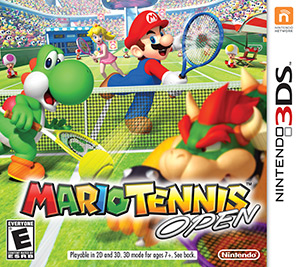 – Rain or shine, Nintendo fans can now enjoy a fun flurry of tennis-themed challenges anytime, anywhere. Mario Tennis Open is now available for the Nintendo 3DS hand-held system, inviting players to step onto the court with Mario and his Mushroom Kingdom pals for fast-paced singles and doubles tennis matches, skill-building Special Games and new online modes that let friends and family members with wireless Internet access compete together. The game also features new ways for players to customize their Mii characters and interact with other players via the built-in StreetPass feature.

In Mario Tennis Open, players can take on the role of fan-favorite characters such as Mario, Luigi, Princess Peach and Bowser, or play as their own personalized Mii character. Choosing between the Nintendo 3DS system's intuitive touch-screen controls or traditional button controls, they can dive into action-packed tennis matches in single-player mode or invite others to join in the fun using a local wireless or Wi-Fi Internet connection. With each victory, players accumulate coins that can be redeemed for virtual items like rackets, sneakers and tennis uniforms, which not only enhance the appearance of their Mii character but also boost their stats on the court.

The action in Mario Tennis Open can get fast and furious as players trade serves, volleys, drop shots and cross-court smashes. Unexpected twists arise when special Chance Areas appear on the court during match play, inviting players to run to those areas to execute supercharged return shots with intense spin or extra power. A variety of Special Games also let players practice their swings and explore new challenges. For example, the included Super Mario Tennis game asks players to complete familiar levels from the classic Super Mario Bros. game by using their tennis swing to stomp Goombas and Koopas.

In addition to well-known Mushroom Kingdom characters like Mario and Luigi, Mario Tennis Open lets players unlock new characters such as Luma, Baby Mario and Dry Bowser. Some characters are unlocked through game play, while others can be unlocked using a special QR Code made available online. Players can visit http://mariotennisopen.nintendo.com for more details.

As many as four players can connect online to play Mario Tennis Open together in singles or doubles matches. The new Open Match mode can also be used to pair a player in a singles game with an online opponent of a similar skill level, and players can view their standings via online leaderboards. With a local wireless connection, Nintendo 3DS owners can connect and play together even if only one of them owns a Mario Tennis Open game card.

Players can use the built-in StreetPass feature of the Nintendo 3DS system to interact with other Nintendo 3DS owners they encounter as they go about their day. They can show off their customized Mii characters and incorporate computer-controlled versions of other players' Mii characters in competitive StreetPass matches or cooperative Ring Shot challenges. Exchanging data via StreetPass requires users to have their Nintendo 3DS system set to Sleep Mode, and both users must have the Mario Tennis Open game.

Remember that Nintendo 3DS features parental controls that let adults manage the content their children can access. For more information about this and other features, visit http://www.nintendo.com/3ds.

About Nintendo: The worldwide pioneer in the creation of interactive entertainment, Nintendo Co., Ltd., of Kyoto, Japan, manufactures and markets hardware and software for its Wii™ home console, Nintendo 3DS™ and Nintendo DS™ family of portable systems. Since 1983, when it launched the Nintendo Entertainment System™, Nintendo has sold more than 3.9 billion video games and more than 630 million hardware units globally, including the current-generation Wii, Nintendo 3DS, Nintendo DS, Nintendo DSi™ and Nintendo DSi XL™, as well as the Game Boy™, Game Boy Advance, Super NES™, Nintendo 64™ and Nintendo GameCube™ systems. It has also created industry icons that have become well-known, household names such as Mario™, Donkey Kong™, Metroid™, Zelda™ and Pokémon™. A wholly owned subsidiary, Nintendo of America Inc., based in Redmond, Wash., serves as headquarters for Nintendo's operations in the Western Hemisphere. For more information about Nintendo, please visit the company's website at http://www.nintendo.com.