ARC STYLE: Soccer 3D – You don't have to worry about the finer points of offside or what counts as a foul in this easy soccer game. Enjoy fast-paced matches with the simple controls of ARC STYLE: SOCCER 3DS!

There is room for endless customization with the ability to change your teams' names and uniforms, and create every team member's features from scratch to make your own original team. You can even use your own photographed face on your team members!

You can also use Nintendo 3DS Local Play with this game and enjoy multiplayer matches.
(For Nintendo 3DS™)

Mutant Mudds™ (demo version) – Love pixels? Fond of platformers? Is there a special place in your heart for the 8-bit and 16-bit era? Want to have fun? Yes!?

Well, you’ve come to the right place, my friend. Mutant Mudds is a “12-bit” action platformer full of pixels and platforming fun!

Our hero, Max, may be just a 2D sprite, but he can leap into the third dimension by jetting between the background and the foreground playfields with his trusty jetpack in this unique dimensionally-woven experience.

This free demo is now available on Nintendo eShop.
(For Nintendo 3DS) 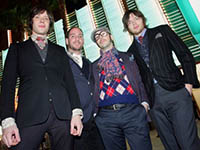 90's Pool - Chalk up a victory with classic 90’s Pool, a fun and realistic pool simulator which will keep you playing for hours!

Compete against a human opponent or the computer, or play on your own in a campaign containing 20 different trick shot missions. The simple user interface lets you easily but accurately control the angle, speed and spin of the shot with your stylus. 3 different skill levels for the computer AI are available for advanced players as well as a realistic physics engine for a stunningly realistic simulation. Set up your shot, crack the cue ball into the pack and enjoy the entertaining gameplay! Hey, you might even improve your actual pool game.
(For Nintendo DSi)

2 Fast 4 Gnomz (demo version) - Four brave gnomes venture on a journey so epic, they don't even know where they're going.

Join Bumb, Berzerk, Speedster and Uncle Time as they run, fly, bounce, glide and break their way through the magical lands of Gnomia to reach their mysterious destiny.

You can help them save the kingdom, find a princess and collect hundreds of precious lost socks.

Run faster than a speeding rabbit!

Become more powerful than a raging elephant!
(For Nintendo Wii)