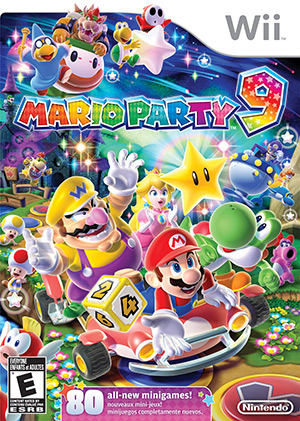 – Nintendo invites everyone to party with Mario and his Mushroom Kingdom friends like never before. Mario Party 9 is now available exclusively for the Wii console, loaded with scores of fun minigames, unlockable extras and new elements that add some unexpected twists to the fan-favorite Mario Party franchise. With a unique mix of competitive and cooperative challenges that up to four players can enjoy together, this super-charged game delivers classic characters, boundless replay value and nonstop smiles for everyone in the household.

In Mario Party 9, players vie to become the Superstar as they make their way through adventurous new stages, overcoming obstacles and collecting Mini Stars. For the first time, players also travel across each stage together in vehicles and join forces in boss battles to defeat a common enemy. This means they must work together to beat classic villains like Bowser and King Boo while still giving their individual scores a boost. Throughout the stages, players take turns acting as Captain of the vehicle, hitting Dice Blocks to move the party toward the goal. As they progress, players may encounter 80 new minigames that might have them making pizzas, escaping haunted houses, bowling shells at Goombas and more.

"There's no party like a Mario party," said Scott Moffitt, Nintendo of America's executive vice president of Sales & Marketing. "The lineup of classic Mushroom Kingdom characters in Mario Party 9 will have longtime series fans feeling right at home, while new elements like cooperative boss battles and vehicles really ratchet up the excitement."

Each stage in Mario Party 9 has its own progression from a starting point to a destination and contains multiple paths for players to choose. In addition to collecting Mini Stars, players also earn Party Points that can be taken to the in-game Museum to unlock a variety of extras, such as character constellations, additional vehicles, a Donkey Kong-themed stage and more. There are also new minigame modes that let players compete in shorter amounts of time, plus a Free Play mode for practicing individual minigames and a fun Extras mode. Additional Wii Remote controllers are required for all multiplayer modes and are sold separately.

Mario Party 9 is the first new Mario Party game since 2007. To date, more than 32 million console and hand-held games in the Mario Party series have been sold worldwide.

Remember that Wii features parental controls that let adults manage the content their children can access. For more information about this and other features, visit http://www.nintendo.com/wii.

About Nintendo: The worldwide pioneer in the creation of interactive entertainment, Nintendo Co., Ltd., of Kyoto, Japan, manufactures and markets hardware and software for its Wii™ home console, Nintendo 3DS™ and Nintendo DS™ family of portable systems. Since 1983, when it launched the Nintendo Entertainment System™, Nintendo has sold more than 3.9 billion video games and more than 620 million hardware units globally, including the current-generation Wii, Nintendo 3DS, Nintendo DS, Nintendo DSi™ and Nintendo DSi XL™, as well as the Game Boy™, Game Boy Advance, Super NES™, Nintendo 64™ and Nintendo GameCube™ systems. It has also created industry icons that have become well-known, household names such as Mario™, Donkey Kong™, Metroid™, Zelda™ and Pokémon™. A wholly owned subsidiary, Nintendo of America Inc., based in Redmond, Wash., serves as headquarters for Nintendo's operations in the Western Hemisphere. For more information about Nintendo, please visit the company's website at http://www.nintendo.com.

mario party 9 not as good as number 8