NINTENDO ADDS SAKURA SAMURAI: ART OF THE SWORD TO AN IMPRESSIVE DOWNLOADABLE LINEUP 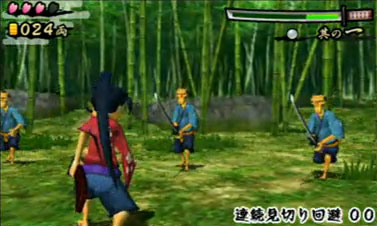 A new game is headed to the Nintendo 3DS™ system, and it won't be available in stores. Sakura Samurai: Art of the Sword™ lets players travel to ancient Japan and guide a young warrior as he battles waves of enemy soldiers to save a princess. He must identify the enemy's attack move, dodge it by a hair and counter-attack with his own mystical Sakura Sword to win the battle. The game launches in January.

Sakura Samurai: Art of the Sword is just one of many high-quality, Nintendo-published downloadable games that can be found in the Nintendo eShop.

On Nov. 24, 2011, Nintendo will release the original 2D version of Metroid™ II: Return of Samus™. This Game Boy™ classic has intergalactic bounty hunter Samus™ Aran battling Space Pirates as she seeks to destroy Metroids on SR388. The game lays the foundation for the smash hit Super Metroid™.

In December, Pushmo lets players try to push, pull and climb their way to the top to solve more than 200 3D puzzles. Play as Mallo, the hero of the game, who is small in size but has a big heart and big muscles to match. Players will use him to move the giant blocks that make up the Pushmo puzzles. Solving the puzzles will free the kids who were accidentally trapped inside them. There is also a Pushmo puzzle creator so players can make their own puzzles and share them with their friends.

Players who can't wait to get their hands on these games can check out some other downloadable games that are available right now in the Nintendo eShop, such as Freakyforms™: Your Creations, Alive! The game lets players create all kinds of wild creatures and bring them to life. No drawing skills are needed, so players of all ages can give it a try. Then they can customize the color and the look, and add eyes and a mouth before the creature comes to life and explores its world.

Also currently available is 3D Classics: Kirby's Adventure™. The classic Kirby™ game has been re-mastered in 3D. Players explore the world of Dream Land and help Kirby cross land, sea and sky in his quest to restore the Star Rod.