REDMOND, Wash., Sept. 12, 2011 – This November, a new system update for the portable Nintendo 3DS™ system will enable owners to capture 3D video footage. People will be able to record and view moments from birthday parties, soccer games and holiday events, or create their own original 3D productions and show them to others in 3D, all without the need for special glasses. The system update will also provide new experiences for people who have conquered all the StreetPass™ challenges in StreetPass Mii Plaza™.

The update is just one of the many elements of Nintendo's strong holiday season lineup that features two Mario™ games – one platformer and one racer – for Nintendo 3DS. The season also sees the arrival of the largest game-development project in Nintendo history: The Legend of Zelda™: Skyward Sword for the Wii™ system.

"The 2011 holiday season offers up multiple must-have Nintendo games for both experienced players and newcomers," said Scott Moffitt, Nintendo of America's executive vice president of Sales & Marketing. "Shoppers know they can count on Nintendo to offer amazing entertainment experiences at an unbeatable value."

The first appearance by Mario on a new Nintendo system is always cause for celebration. This fall, Nintendo is giving fans two big reasons to celebrate. On Nov. 13, Nintendo will release the Super Mario™ 3D Land™ game for Nintendo 3DS. In this first-ever true 3D Mario platforming adventure, players can scout levels and find secrets before they play using the built-in gyro sensor feature of the Nintendo 3DS system. 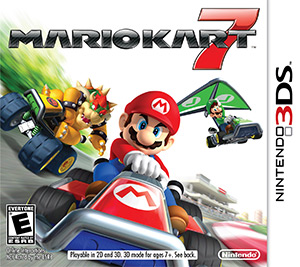 The game will feature propeller blocks and will have StreetPass functionality.

Mario Kart™ 7 will be available Dec. 4 and will include a new optional first-person driving mode that is controlled using the gyro sensor. The game also introduces new playable characters like Lakitu and Metal Mario, and a tricks system like the one in Mario Kart™ Wii. Both games are essential to the game libraries of Mario fans, and more details about them will be announced in the future.

Nintendo is pulling out all the stops in honor of the 25th anniversary of The Legend of Zelda™. The Legend of Zelda: Skyward Sword launches Nov. 20 and represents one of the deepest and richest experiences ever produced by Nintendo. More than 100 staff members have been working for five years to produce the epic story, which includes a new approach to game play and more than 100 minutes of cinematic cut scenes. The game also will feature a boss challenge mode and, for players who need assistance, optional hint movies to help them along.

In honor of the 25th anniversary, Nintendo is offering a free classic game for a limited time. The Legend of Zelda: Four Swords Anniversary Edition will be available to download between Sept. 28, 2011, and Feb. 20, 2012. Fans can download the Nintendo DSiWare™ version of the game using their Nintendo DSi™ or Nintendo DSi XL™ systems, or by accessing the Nintendo eShop with a Nintendo 3DS system (wireless broadband Internet access is required for download). The game allows up to four players who have downloaded the game to play cooperatively and has also been enhanced with a new single-player mode. Unlike the original, all multiplayer game play is handled wirelessly. Once players finish the main quest, they will unlock new stages and abilities to expand the game's replay value.

Fans of Nintendo's downloadable games will be getting a special Zelda treat as well. Between Oct. 3, 2011, and Feb. 20, 2012, select retailers will carry limited-edition cards highlighting the series' 25th anniversary. The Nintendo 3DS Prepaid Card, which is used in the Nintendo eShop of the Nintendo 3DS system, features an image of Link™ battling Ganon. The Nintendo Points Card, which can be used in the Wii Shop Channel or Nintendo DSi Shop, shows Link flying high in a scene from The Legend of Zelda: Skyward Sword.

Beyond the holiday season, Nintendo is already making plans for 2012. Nintendo is revealing a previously unannounced 3D Mario tennis game for the Nintendo 3DS system. Mario Tennis™ (name not final) will launch in 2012 and more details will be announced later.

Also in 2012, Nintendo 3DS owners will be able to enjoy a new 3D installment in the Animal Crossing™ franchise. This version will include a number of options not available in previous versions. These include the ability to become the head of the village and boost its development, a way to install certain items in the village to make its characteristics more personalized for each player, and the ability to view homes of other players who are tagged through StreetPass connections.

In 2012, Nintendo 3DS fans will also see the arrival of new games in the Luigi's Mansion™ and Paper Mario™ franchises.

In one final bit of news, the development team for Kid Icarus™: Uprising for Nintendo 3DS has determined that more time is needed to complete the game. As a result, the game will now launch in 2012. Nintendo is also in the process of developing 3D Kid Icarus animations with critically acclaimed Japanese anime production houses. These animations will be made available free of charge via the Nintendo Video™ service to Nintendo 3DS owners worldwide.

Remember that Wii and Nintendo 3DS feature parental controls that let adults manage the content their children can access. For more information about Nintendo, visit http://www.nintendo.com.

About Nintendo: The worldwide pioneer in the creation of interactive entertainment, Nintendo Co., Ltd., of Kyoto, Japan, manufactures and markets hardware and software for its Wii™ home console, Nintendo 3DS™ and Nintendo DS™ family of portable systems. Since 1983, when it launched the Nintendo Entertainment System™, Nintendo has sold more than 3.7 billion video games and more than 600 million hardware units globally, including the current-generation Wii, Nintendo 3DS, Nintendo DS, Nintendo DSi™ and Nintendo DSi XL™, as well as the Game Boy™, Game Boy Advance, Super NES™, Nintendo 64™ and Nintendo GameCube™ systems. It has also created industry icons that have become well-known, household names such as Mario™, Donkey Kong™, Metroid™, Zelda™ and Pokémon™. A wholly owned subsidiary, Nintendo of America Inc., based in Redmond, Wash., serves as headquarters for Nintendo's operations in the Western Hemisphere. For more information about Nintendo, please visit the company's website at http://www.nintendo.com