July 21, 2011 - This week Nintendo's downloadable services sees six new games spread across its services, including the latest 3D remake of a classic game. 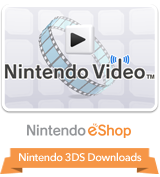 Nintendo Video™ - Coming soon, the new Nintendo Video service delivers short 2D or 3D videos from the worlds of music, comedy, animation and Hollywood. The 3D content can be viewed without the need for special glasses.

*Nintendo Video content is downloaded onto your SD Card via Spotpass and viewable only through Nintendo Video. Videos are available for a limited time only. Wireless Internet access required. SpotPass feature must be enabled.
(For Nintendo 3DS™)

3D Classics: Xevious™ - Revisit the popular vertical-scrolling arcade game with elements that can be enjoyed in 2D or 3D.

Re-mastered exclusively for the Nintendo 3DS, fly Solvalou in a battle against Xevious forces!

In this enhanced version, view Solvalou from a mid-air perspective, gauging incoming fire from down below while the scenery and aerial enemies fly on by! Pilot the advanced fighter-bomber through 16 hazardous areas and destroy as many targets as possible. Annihilate the Andor Genesis for extra points and earn a place in the High Scores!

The age-old question stands for the long-time and new fans of this arcade classic--are you devious enough to beat Xevious?
(For Nintendo 3DS)

Antipole - Wield the power to reverse gravity as you fight your way through the robot mothership. Manipulate gravity to overcome lethal obstacles, change falls into jumps and defeat your enemies.

Watch the world around you change with the direction of gravity, opening paths to explore and creating new hazards. Collect coins in hard-to-reach locations and use them to unlock additional challenge levels.

Kung Fu Dragon - As a martial artist in training, you must face one of the most difficult tests of skill: waterfall climbing.

Select your warrior and prepare yourself. Your destiny awaits you.

Deep within the legendary forest, the Mystical Waterfall breathes spirit in the training, inspiring the final challenge. Now, three warriors will face the honorable quest to become the next Kung Fu Dragon.

Kung Fu Dragon is an action game in which the player climbs up an immense waterfall by performing a series of jumps. As a martial artist in training, you must face one of the most difficult tests of skill ever: waterfall climbing. You can increase your score by climbing higher up the waterfall by jumping between the various footholds that come falling down. However, watch out for the enemies that block your way, defeat them by jumping on them as you continue to climb as high as you can!
(For Nintendo 3DS / Nintendo DSi)

Trollboarder - Descend the slopes in the craziest snowboard game in history.

What happens when goblins steal the dragons' treasures while you're in charge of protecting them? The dragons become furious. You must recover all of the treasure as quickly as possible. Control the last guardian on his snowboard and take part in furious races to recover the stolen coins. Perform your best tricks to gain the favor of the dragons and discover invisible chests.
(Nintendo eShop, Nintendo DSiWare)

Bobby Carrot isn't just any hare. When he sleeps, he dreams of incredible adventures and fantastic worlds. Would you like to go with him today? Guide the famous puzzle hare through hundreds of exciting levels, find and use cool items, avoid obstacles and collect all carrots to win. Uncover the secret of the 6 golden carrots and meet new friends who will help you on your way.

Bobby Carrot rekindles the age of classic console gaming with charming 2D graphics and simplified controls. Lean back and enjoy a brain bending puzzle adventure for the whole family.
(WiiWare™)

As a Newbie to the internet, I am always searching online for stuff that can help me. Thank you for your help. 00-)