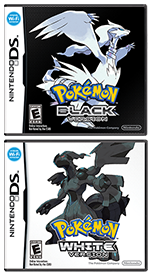 New York's famed Rockefeller Center® will be the epicenter of an over-the-top Pokémon™ celebration as Nintendo prepares to launch the new Pokémon Black Version and Pokémon White Version video games for the Nintendo DS™ family of systems across North America. On March 5, at the Nintendo® World store, fans will gather for a spectacular launch event and the chance to be among the first in the nation to buy the games in advance of their official March 6 release.

The event will offer attendees an interactive experience that will take consumers through stations featuring game-play kiosks, depictions of the games' new starter and Legendary Pokémon, a download area for the Liberty Pass which enables players to get the new Mythical Pokémon Victini in the Pokémon Black Version and Pokémon White Version games, a photo booth and a special collection of never-before-seen Pokémon artwork. Attendees will receive a "passport" upon entry and earn a stamp for each station they experience. Once they have visited all stations, fans will receive a special Pokémon Black Version or Pokémon White Version T-shirt, while supplies last.

WHO:
Kids, teens, adults, parents, Pokémon fans and consumers of all kinds