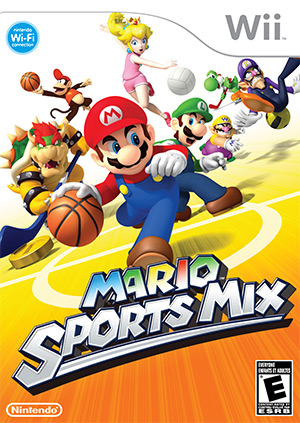 Dec. 21, 2010 - Mario™ has a long history as a sports fan. Throughout his storied career he has pursued an interest in golf, tennis, baseball and go-karting, to name just a few. Now Mario's tackling four different sports at the same time, all of them included on one disc for the Wii™ console. The game MARIO SPORTS MIX lets players jump into games of hockey, basketball, volleyball or dodgeball. The game launches on Feb. 7, 2011.

MARIO SPORTS MIX presents these four familiar sports - but with a Mario twist. Players can choose from a variety of playable Mushroom Kingdom characters and can even challenge Mario and friends directly by playing as their own Mii characters. Each game contains a number of Mushroom Kingdom power-ups that can turn the tide of a game in an instant, such as banana peels, green shells and even mini mushrooms. In over-the-top Mario sports fashion, each character can unleash his or her unique special move that ranges from Mario's fire dunk in basketball to Yoshi's rainbow attack in dodgeball.

Players can also elect to hold their matches in a number of interesting venues. For example, the Wario Factory has conveyor belts that affect how the players move on the court, while in Peach's Castle, fountains go up and down to block certain areas of the net in Volleyball.

Up to four friends who are in the same room can join in the fun, while up to four players (one or two at each location) can compete over a broadband Internet connection via Nintendo® Wi-Fi Connection. Players can play online against friends with whom they have traded friend codes, or anonymously against other opponents. Multiplayer modes require additional controllers, which are sold separately.

wii will begin at thirty lmao :-)