Anime and, in our case, Pokemon anime, made it's appearance at this years Comic Con in New York.

We have for you some pictures showing what we mean. 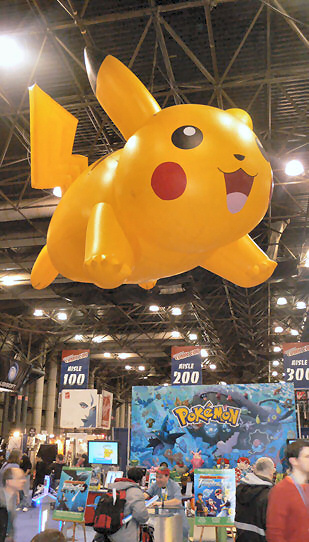 Did you think Pokemon went out with the late '90s?
Pikachu would like to have a word with you. Upon walking into the show hall at the Jacob Javits Convention Center, one of the most noticeable sights was an enormous inflatable likeness of the famous Pokemon character. The "electric mouse" has become one of the most recognizable symbols of Japanese pop culture and its influence in the U.S. 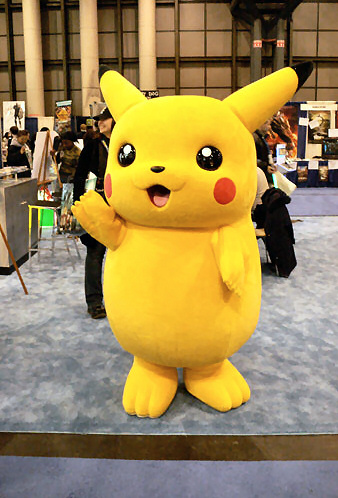 As if a Pikachu hanging from the ceiling wasn't enough, the expansive Pokemon booth at NYC ComicCon also featured a mascot in a Pikachu costume. Plenty of children flocked around it--some to pose for photos, and others to mischievously pull its tail. 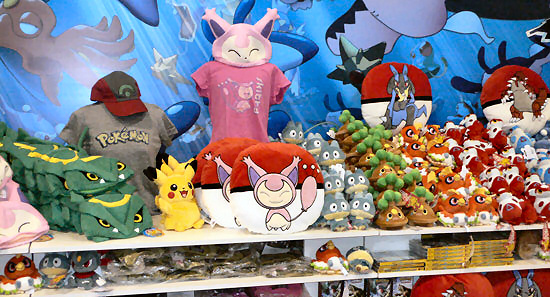 Several years ago, Pokemon was a massive kiddie-culture craze that faded, but now the anime powerhouse has taken on a sort of cult following. Loads of Pokemon memorabilia was for sale at NYC ComicCon; plus, there were autograph signings by the accompanying TV show and movie's voice actors, and demonstrations of the new Pokemon video games for Nintendo's DS console. 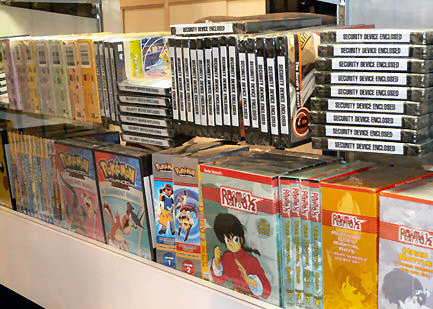 Anime DVDs also featured heavily. Some, like these Pokemon and Ranma 1/2 DVDs, were new offerings from anime mainstays that have been available to U.S. audiences for years, but many of the others were more obscure.

I want to thank CNET News.com and Caroline McCarthy for these great photos.

This entry was posted by ppnsteve and is filed under Fun, In real life, News.

Hmm is anyone else having problems with the pictures on this blog loading?
I’m trying to figure out if its a problem on my end
or if it’s the blog. Any feedback would be greatly appreciated.

All the images are loading just fine for me. Have you tried a hard refresh (ctrl+f5 in windows) and reloading the page??